The Dome of Sound

We’ve all seen them at museums – maybe didn’t even realize what we were seeing. They  help control the noise level but mitigate the need for headphones.  That was my goal when I applied for a GCAC grant for my “sound dome”. 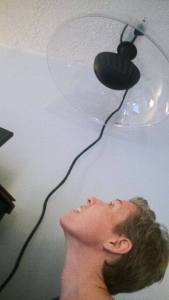 I found that museums and galleries are hesitant to install video because of sound spilling out or headphones having a “gross factor”.  Not to mention holes in the walls.  My goal was to make a sort of pop-up cinema with decent sound that was focused instead of shaking the whole neighborhood.  I found two major brands of domes: Brown Innovations and SoundTube.  The latter being most accessible through online vendor B&H – it also appeared the most affordable.  The dome needed an amp and to keep the cost reasonable I went with $35 Lepy for the initial tests.  I think I could use a stereo receiver from the thrift store, but have yet to test this option.  SoundTube came with room for expansion and may lead to other – future experiments.  There are programmable buttons, mounting arms, lights, and a motion detector.

For my setup I had the TV and player and my grant included the dome and amp but I needed a stand to make this pop-up cinema stand-alone and somewhat portable.  The stand needed to be height adjustable with shelves for the amp and player.  The mount should accommodate multiple TV sizes – hopefully 24″ –  50″.  Though the Vivo I chose did not list 24″ as an option – the plug location was the only issue and could be mitigated through some creative modifications.  The two shelves are easy to disassemble and move, though in my head the 72″ height was much higher than it really is.  This meant that the dome needed separate support that took it to a height closer to 8′.  The end result was a separate stand cobbled from a light stand, a double grip head and galvanized pipe. Counter weights were simply free-weights attached by an end cap. Attaching the dome to the pipe was the problem – but I modified a conduit hanger to have a cup hook and attached the dome with an s-biner. 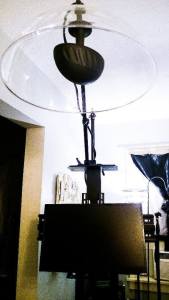 This whole setup for the pop-up cinema debuted at Columbus’ Independents’ Day festival in September 2015 under the name “The Experimentals” as it showcased experimental works by several local filmmakers with intriguing scores to demonstrate the dome’s capabilities.

Future plans may include scrim to cover all the legs and cords, a box for the player and amp, a more reliable stand for the dome, a cover for outdoor festivals, and a way to draw people in to the dome’s audible sweet spot.